To submit a nomination, or for more information.

North Star recognizes teachers nominated by other teachers for outstanding achievement and contributions to establish a positive school climate.

Recognition of achievements is based on alignment with the organizational goals outlined by the Trustees’ Multi-Year Plan in combination with the criteria set out in Staff Awards and Student Awards policies.​ 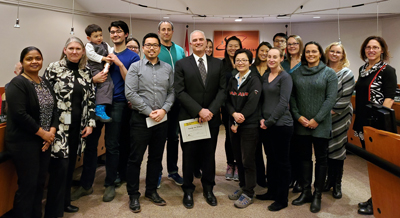 Below is Huron’s nomination:

​George is the kind of department head that teachers wish about having. The science department at Richmond Hill High School is a tight-knit family largely because of the way that George brings us together. He encourages us to take risks and support each other to make the best out of each 75 minute period. There is no bigger cheerleader than George. Not only do we go to George for school advice, he also cares about us as people and we seek his wisdom in life outside of school.

He is always willing to listen and lend a hand. I cannot count the number of times that George has come to speak to different teachers after a tough day. Just this weekend, a colleague of ours lost their father unexpectedly. As soon as George found out, he made sure that our colleague would not have to worry about school and organized coverage within the department so that students would not suffer either.

He helps us see the bigger picture and what it really means to be a good teacher. He is the kind of guy that will give up his weekend/evenings to come help you with anything. No PA day passes without a feast where 20 teachers eat together, (a rare occurrence in a school with staggered lunch periods.) Some say that 'great leaders eat last' and George is representative of that in the literal sense and metaphorical sense when he can be seen cooking up a storm or manning the grill at our gatherings.

I feel so lucky to have worked with George all these years and he is truly deserving of the North Star Award.​ 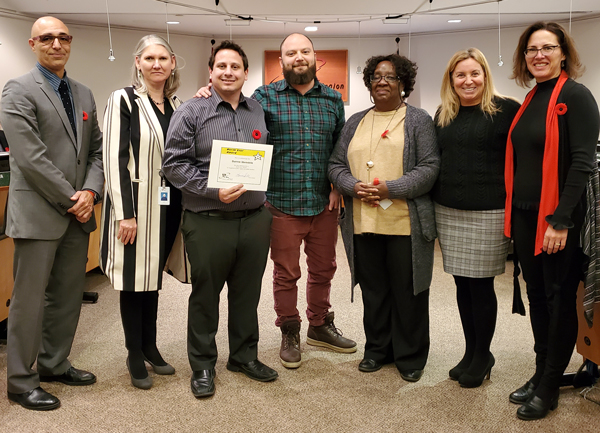 November’s North Star recipient is Darren Abenstein from Stephen Lewis Secondary School in Thornhill. Darren was nominated for this award by Zachary Teitel who teaches at Unionville High School.

Below is an excerpt from Zachary’s nomination:

Darren is the model that all new teachers should be learning from. He epitomizes the old teaching maxim, "They may not remember what you taught them, but they will remember how you made them feel."

Darren's compassion and care for those he works alongside extends to his colleagues. He is continuously looking out for the teachers around him, whether supporting them on a curricular level (e.g. offering to collaborate or give extra time to newer teachers) or regarding staff mental health and well-being (e.g. checking in with colleague's that seem stressed; buying bagels for the entire office after a tough day).​ 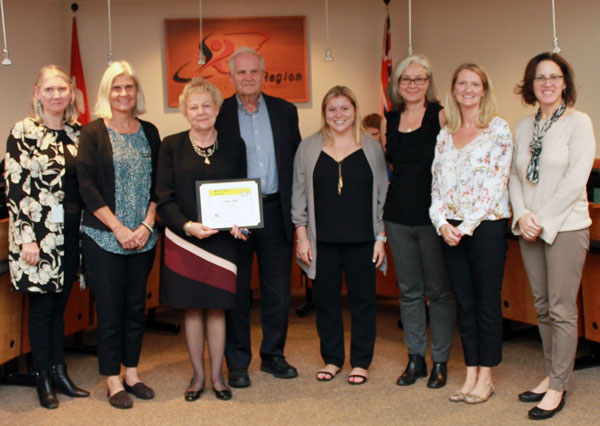 Linda was nominated for this award by Dorothy Schmauder.

Below is an excerpt from Dorothy’s nomination:

Linda exemplifies everything this award is about. She IS the social committee; often planning events, collecting money and honoring everyone’s special life moments. She is the teacher EVERY teacher goes to for sympathy, empathy and advice. She always makes time for everyone. She cancelled an after school appointment so she could stay late finish her own work because she used her time on the PA day to help other teachers. She is unselfish in her time, energy and resources. If a teachers needs ANYTHING, their first stop is Linda Cabral. If she doesn’t have it, she will find it for you.

She makes everyone feel special and important, offering compliments and praise which helps builds our morale. She spends her money on others; for years she bought milk for everyone’s morning coffee, never asking to be reimbursed. I am sure she spends her own money on social committee obligations as well.

As a result of her kindnesses, she has formed many friendships outside school where her helpfulness has included babysitting, moving help, prep work for school and decorating. Linda is the heart of our school and without her we would be bereft.

She has been this kind of staff member her entire career, at every one of her schools.